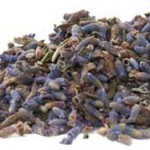 Lavender flowers are approved by the German Commission E for promoting both a healthy mood and healthy circulation. The scent of lavender has shown to have positive effects on mood within certain adult populations and can help to alleviate mild feelings of agitation or distress. As a spice, lavender is best known as an important aspect of French cuisine and is an integral ingredient in herbs de Provence seasoning blends. Lavender may be used on its own to give a delightful, floral flavor to desserts, meats, and breads. The flowers can also be layered within sugar to infuse it with its distinctive aroma for use in cookies and candies. Similar to cilantro, some individuals perceive the taste of lavender in a manner that is undesirable within cuisine. An estimated 10% of the population interprets lavender to have a soapy and unsavory flavor. For this reason, it may be wise to exercise caution while using lavender as a flavoring agent. Lavender has been thought for centuries to arouse passions as an aphrodisiac, and is still one of the most recognized scents in the world.

Lavender is aromatic perennial evergreen shrub. Its woody stems bear lavender or purple flowers from late spring to early autumn, although there are varieties with blossoms of white or pink. Lavender is native to the Mediterranean, but now cultivated in cool-winter, dry-summer areas in Europe and the Western United States. The use of Lavender goes back thousands of years, with the first recorded uses by the Egyptians during the mummification process. Both the Greeks and the Romans had many uses for it, the most popular being for bathing, cooking, as an ingredient in perfume, healing wounds, and as an insect repellant. Lavender was used as an after-bath perfume by the Romans, who gave the herb its name from the Latin lavare, to wash. During the Great Plague of 1665, grave robbers would wash their hands in a concoction called “Four Thieves Vinegar”, which contained lavender, wormwood, rue, sage, mint, and rosemary, and vinegar; they rarely became infected. English folklore tells that a mixture of lavender, mugwort, chamomile, and rose petals will attract sprites, fairies, brownies, and elves.

Typical Preparations: Teas, tinctures, and added to baked goods. Cosmetically it has a multitude of uses and can be included in ointments for pain and burn relief.

Precautions: For best results, avoid heating the herb directly with boiling water, although a simmer is fine.